Anyone who watches silent movies will notice how often crashes occur—trains, cars, and people constantly collide and drama or comedy ensues. Gregory Robinson’s All Movies Love the Moon is also a collision, a theater where prose, poetry, images, and history meet in an orchestrated accident. The result is a film textbook gone awry, a collection of linked prose poems and images tracing silent cinema’s relationship with words—the bygone age of title cards. The reel begins with early experiments in storytelling, such as Méliès’ A Trip to the Moon and Edison’s The European Rest Cure, and ends with the full-length features that contested the transition to talkies. Of course, anyone seeking an accurate account of silent movies will not find it here. Through Robinson’s captivating anecdotes, imaginings, and original artwork, the beauty of silent movies persists and expands. Like the lovely grainy films of the 1910s and 20s, All Movies Love the Moon uses forgotten stills, projected text, and hazy frames to bring an old era into new focus. Here, movies that are lost or fading serve as points of origin, places to begin.

Watch clips from many of the movies that make an appearance in All Movies Love the Moon on Gregory Robinson’s website here.

«What an intriguing amalgam of genres Gregory Robinson has created in his All Movies Love the Moon. Part silent film history, part poetic romp, this fine collection recalls the work of the great Uruguayan poet/historian Eduardo Galeano, author of Memory of Fire. Rich rewards await as you step into the dark rooms of these poems that flicker by ever so beautifully at 16 frames per second.»

David Shumate, author of Kimonos in the Closet

«All Movies Love the Moon, with its salute to Georges Méliès, is somewhat like the visionary himself: mischievous, innovative, enigmatic, witty, and captivating. Robinson’s book is a beautiful hybridization of film history and poetic journey. Roaming through the celluloid cemetery of silent films, Robinson becomes a Dr. Frankenstein as he reconstitutes pre-existing material into new forms: he is both alchemist and ‘cinematic recycler.’ This book has the noteworthy skill of persuading the reader to revisit it immediately, while concurrently enticing the reader to (re)see the films it so lovingly pays tribute to. Pour a glass of wine, settle in, and be transported.»

«In the eighteenth century Laurence Sterne broke all the rules of novel-writing that hadn’t yet been written with Tristram Shandy. In 2013 Gregory Robinson’s All Movies Love the Moon travels back in time to the dawn of cinema, when silent movies were as surreal, playful, dislocating, and dumbfounding as the twentieth century itself. In deadpan prose poems Robinson tracks the gradual emergence of narrative out of the dream logic of pure images, and the more sudden birth of pop culture as we know it, until we see Theda Bara and Sylvester Stallone silently side by side at last. The poetry in film, the film in poetry: the book is a delirious romp through the grammar of their entanglement. Or as Robinson puts it, ‘Any great detective will tell you the trick is not walking into movies but finding the way out again.’»

«Gregory Robinson’s All Movies Love the Moon brings silent film, that drowned and nearly forgotten continent, back to life and into our time. From the hand-colored fantasy of Méliès’ A Trip to the Moon to Hitchcock’s chilling thriller The Lodger, each of these prose poems is a movie—one filled with the sheer joy we take in watching as the projector’s light illuminates the darkness.»

Jesse Lee Kercheval, author of Cinema Muto and My Life as a Silent Movie

«All Movies Love the Moon is as much the autobiography of a cinéaste as a history of silent film and the linguistic windows through which it makes meaning. Interspersed with real and invented intertitles to guide us through his poetic underworld, Gregory Robinson’s prose poems conduct a cinematic séance in which an array of personal and celluloid spirits parade before the reader. Inquiry gives way to elegy both historical and personal, and the book’s great trick is ‘to bend trust without breaking it, to lead by the hand rather than by the wrist’ as Robinson guides us gradually into the imaginative space between words on a screen. Robinson sees the irony in nostalgia for those days before film was given voice, but if we are not tempted by his ‘Vertov Kino app, which makes the iPhone weigh 40 pounds and replaces the battery with a wooden crank,’ then, reader, we are the cranks.» 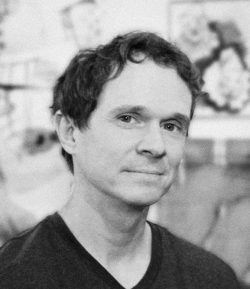 Gregory Robinson lives in Boulder City, Nevada with his wife Joan and his dog BinBin. He is currently Chair of the Humanities Department at Nevada State College. When he is not writing, he is hiking around the desert, doing iaido, or (of course) watching movies. Visit his website here.