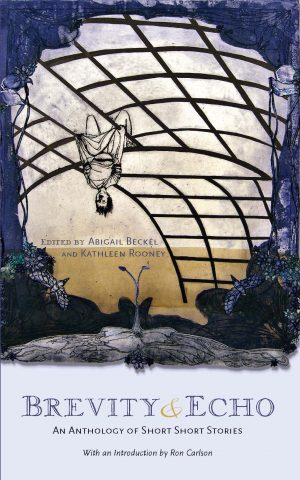 With an introduction by Ron Carlson and an afterword by Pamela Painter.

Brevity & Echo is an essential anthology of previously published short shorts by Emerson College alumni. Emerson College was one of the first and remains one of the only writing programs in the country to offer specific classes in and extensive support for the short short story. Brevity & Echo is a celebration of this continuing legacy and of short shorts as a rich and expanding genre. Brevity & Echo contains work by Don Lee, Denise Duhamel, Lee Harrington and many more, as well as an introduction by Ron Carlson and an afterword by Pamela Painter. These tiny fictions—the longest weighing in at 1400 words and the shortest at just 55—appeared originally in the pages of such books and journals as McSweeney’s, StoryQuarterly, Quick Fiction, What If?, Night Train, failbetter, and Best American Non-Required Reading.

«The short short fiction in Brevity & Echo sweeps us out into a sudden place, and we should just go.»

«This review is 1,944 words long, including the ones in this sentence. Why is this important? It’s the question that Brevity & Echo is attempting to answer, like a train will answer with a thought when you’ve set a penny on the tracks. You want to see something beautiful and strange get made. You wander off, only to come back later, having missed the action, and there it is: a shiny, copper pendant, a transformation.

Abigail Beckel and Kathleen Rooney’s anthology Brevity & Echo is making that transformation, taking the popular short (short) fiction form and presenting a coherent and demanding example of what that form entails. […] and Brevity & Echo makes the case, and proves, that short shorts are viable and compelling. Just as no one would compare a novel to a short story, there’s no way to explain, quite, the difference between those fiction forms and the one embodied in this anthology. Though the quantity of words is different, the quality is the same. You’ve returned and found your shining pendant on the train track, still warm, the unseen train singing into the distance.»