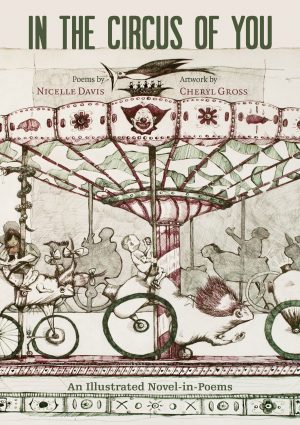 In the Circus of You is a deliciously distorted fun house of poetry and art by Nicelle Davis and Cheryl Gross. Both private and epic, this novel-in-poems explores one woman’s struggle while interpreting our world as a sideshow, where not only are we the freaks, but also the on-lookers wondering just how “normal” we are—or ought to be. Davis’ poetry and Gross’ images collaborate over the themes of sanity, monogamy, motherhood, divorce, artistic expression, and self-creation to curate a menagerie of abnormalities that defines what it is to be human. The universe of this book is one in which dead pigeons talk, clowns hide in the chambers of the heart, and the human body turns itself inside out to be born again as a purely sensory creature. This grotesquely gorgeous peep show opens the velvet curtains on the beautiful complications of life.

«Nicelle Davis’ newest book mythologizes pain, making grief, anger, disgust, and fear bearable by transforming them into finely wrought poems. These poems are filled with sharp edges, dissections, illusions, and images of flight, both in their language and in the ways they occupy the page. They are perfectly matched by the drawings of Cheryl Gross, who translates Davis’ poetry into an equally grotesque, equally eloquent visual language. In the Circus of You is a visceral spectacle of controlled excess; it dismantles the three rings we use to contain our most domestic horrors and shows us the way through vulnerability to release.»

«Accompanied by Cheryl Gross’ illustrations of stretched flesh and biomechanical anatomies, In the Circus of You writhes in a fever dream of divorce, depression, and an undercurrent of poverty. Nicelle Davis directs a cast of disfigured pigs, desiccated pigeons, and circus freaks in poems whose forms are often cinched with wasp-waisted girdles or filed into jagged angles. Never simple oddities, these afflicted characters and musical poems amount to a harrowing account of loss and how one has to fracture herself in private to appear unbroken in public. Don’t miss Davis’ acts of lurching grace and terrible beauty.» 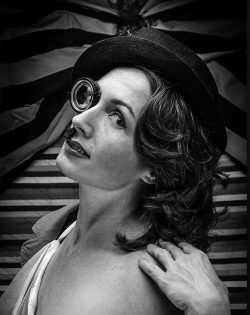 Nicelle Davis is a California poet who walks the desert with her son J.J. in search of owl pellets and rattlesnake skins. The author of two other books of poetry, her most recent book, Becoming Judas, is available from Red Hen Press. Her first book, Circe, is available from Lowbrow Press. Another book of poems, The Walled Wife, is forthcoming from Red Hen Press in 2016. Her poems have appeared or are forthcoming in The Beloit Poetry Journal, The New York Quarterly, PANK, SLAB Magazine, and others. She is editor-at-large of The Los Angeles Review. She has taught poetry at Youth for Positive Change, an organization that promotes success for youth in secondary schools, MHA, and with Volunteers of America in their Homeless Youth Center. Recipient of the 2013 AROHO retreat 9 3/4 Fellowship, she is honored to work as a consultant for this important feminist organization. She currently teaches at Paraclete and with the Red Hen Press WITS program. Visit her website here. 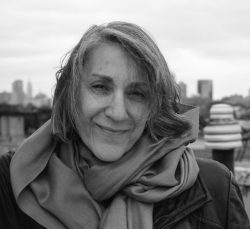 Born and raised in Brooklyn, New York, Cheryl Gross is an illustrator, writer, and motion graphic artist living and working in the New York/Jersey City area. She is a professor at Pratt Institute and Bloomfield College.
Cheryl received her MFA from Pratt Institute. Her work has appeared in numerous films, TV shows, publications, and corporate and museum collections, including: The Museum of the City of New York, The New York Times, The Zebra Poetry Film Festival in Berlin, Germany, Jimmy Stewart and His Poems, Circe, and Becoming Judas, among others. She wrote and illustrated the novel The Z Factor. Visit her website here.