Winner of the SILVER medal in Literary Fiction and a Finalist for Historical Fiction in the Foreword Reviews INDIES Book of the Year Awards.

Liliane’s Balcony is a multi-voiced novella-in-flash set at Frank Lloyd Wright’s Fallingwater. Built for Pittsburgh merchants E.J. and Liliane Kaufmann in 1935, the house is as much a character as it is a setting. One September night in 1952, Liliane Kaufmann—tired of her husband’s infidelities—overdoses on pain pills in her bedroom. From there, Liliane’s Balcony alternates Mrs. Kaufmann’s mostly true story with the fictional narratives of four modern-day tourists who arrive at the historic home in the midst of their own personal crises, all of which culminate on Mrs. Kaufmann’s over-sized, cantilevered balcony. With its ghosts, motorcycles, portraits, Vikings, failed relationships, and many layered voices, Kelcey Parker’s Liliane’s Balcony is as dizzying and intricately beautiful as the architectural wonder in which it is set.

«Liliane’s Balcony is as layered and audacious as the house at the center of the novella. Parker dances effortlessly between present and past, fact and fiction, nature and interior, lovers and out-of-lovers. The story that emerges is moving and precariously beautiful: a book that in lesser hands might have come toppling down. In Parker’s, it’s a triumph.»

Caitlin Horrocks, author of This Is Not Your City

«As Frank Lloyd Wright re-interpreted domestic architecture, so Kelcey Parker deconstructs the so-called ‘Wife Book’ in this innovative blend of biography and fiction, past and present, carnal and occult. Liliane’s Balcony tells a story about the woman whose fervor for the arts built Fallingwater—and the husband whose sexual appetites demolished her dreams.»

Cathy Day, author of The Circus in Winter

«In Liliane’s Balcony, Kelcey Parker skillfully interweaves the voices of a wide range of richly drawn characters, each experiencing Fallingwater, the Frank Lloyd Wright masterpiece, in diverse, compelling ways. For anyone who has visited, the vivid descriptions will take you back; for anyone who has not experienced Fallingwater first-hand, this book will conjure the magic out of thin air. But while Fallingwater is at the center of this swirling drama, Liliane’s Balcony is at its heart a tale of love—the struggle to imagine it, the struggle to find it, and the struggle to keep it.»

«Liliane’s Balcony proves stylishly and poignantly that just as buildings don’t have to be huge to be architecturally daring, narratives don’t have to be massive in scale to be grand in accomplishment. The story lines here—a contemporary one set on a tour of Fallingwater, a historical one featuring the original owner, the venturesome, conflicted, and fascinating Liliane—are ingeniously designed and expertly joined. The result is a meditation on marriage, architecture, womanhood, ghosts, and the idea of the genius loci that will linger with the reader long after the book is closed. This reminded me of great novels of architecture and psychology like Kathryn Davis’s Hell and Joanna Scott’s The Manikin, but Kelcey Parker is a unique talent, and Liliane’s Balcony is a revelation.» 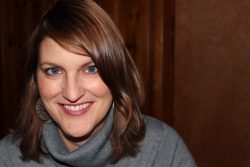 Kelcey Parker’s first book, For Sale By Owner (Kore Press), won the 2011 Next Generation Indie Book Award in Short Fiction and was a Finalist for the 2012 Best Books of Indiana. She directs the creative writing program at Indiana University South Bend. During the summer of 2012, she worked as an Ask-Me Guide at Fallingwater, where she asked as many questions as she answered, helped visitors get the perfect photo of Fallingwater, and always kept an eye out for Liliane’s ghost. Visit Kelcey’s website.