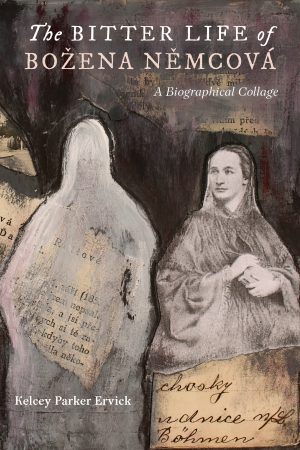 Winner of the SILVER MEDAL in the European Regional Nonfiction Category of the Independent Publisher Book Awards (IPPYs).

Finalist in the Women’s Studies Category of the Foreword Reviews INDIES Book of the Year Awards.

Finalist for the 2017 Eric Hoffer Awards.

Artistic, rebellious, and unapologetically intelligent, Božena Němcová defied every convention for a woman in mid-nineteenth-century Bohemia: she was active in nationalist politics, she smoked cigars, she took a series of lovers, and she laid bare her ideas and emotions in her letters and stories. The Bitter Life of Božena Němcová is a biographical collage of found texts, footnotes, fragments, and images by and about the Czech fairy tale writer, whom Milan Kundera calls the “Mother of Czech Prose.” Kelcey Parker Ervick’s innovative collage form, with its many voices and viewpoints, questions the concept of biographical “truth” while also revealing a nuanced and spellbinding portrait of Němcová. Inspired by Němcová’s letters, the book’s second section, “Postcards to Božena” is Parker Ervick’s epistolary memoir of her own failing marriage and her quest for a Czech typewriter, as well as a meditation on reading, writing, and happy endings. The two sections combine to create a book as defiant, enchanting, and complex as its namesake.

«The Bitter Life of Božena Němcová by Kelcey Parker Ervick is one of the least bitter, most loving books I have read in a long time, and it’s beautifully made. Fans of Jenny Boully’s not merely because of the unknown that was stalking toward them and Maggie Nelson’s The Argonauts—frankly, anyone interested in fairy tales and in memory and in desire—should read this haunting biographical collage. It’s a terrific work of lyric nonfiction, a form underrepresented on the fairy tale shelves.»

Kate Bernheimer, author of How a Mother Weaned Her Girl from Fairy Tales

«This multi-genre biographical novel delighted and enlightened me—that research, journalism, imagination, postcards, poetry, archival letters, found raw materials, and imaginative synthesis could result in such a beautifully clear book. Frequently, multi-genre experiments remain experiments—that is, failures—but this book is a huge success. Parker Ervick has transported me to Prague and shown the blending of fairy tales, history, and cultures laying the groundwork for Kafka’s surrealism (and exported far away, magic realism). With a touch of magic, Parker Ervick plays with the shrouds of mystery surrounding Božena’s life and origins: Was Goya her father or grandfather? Metternich? Her love affairs seem to be worthy of Anaïs Nin. Behind so many imaginative men of letters in Bohemia, it turns out there was one astonishingly creative woman, Božena Němcová. I recommend the book: you will learn, imagine, and enjoy!»

«Kelcey Parker Ervick’s The Bitter Life of Božena Němcová is a singular compendium—a handbook, a digest, an offering, a constellation in orbit around the strange bright star of nineteenth-century Czech writer Němcová. Via a series of carefully curated letters, excerpts, images, and documents, Němcová is brought to life in curious gasps. But the book is also a vivid and gripping portrait of another artist, Kelcey Parker Ervick, who, in searching for the other finds something of herself.»

«There is, in books of this hybridized magnitude and hermeneutics, much brouhaha about defining ‘fiction’ and ‘fact.’ But Kelcey Parker Ervick’s ombre collage of augmented reality, The Bitter Life of Božena Němcová, worries the more striking boundary between narrative and lyric. How (with a medium that, by its very existential nature, wants to go linear) does Parker Ervick construct such an atmospheric atmosphere that propels us every which way and all at once? Parker Ervick’s ‘biography’ squares Stein’s cubistic demarcations, inventing depthless dimensions and undreamed of ‘ofs’.» 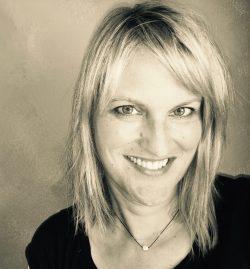 Kelcey Parker Ervick has traveled to Prague regularly since 2003 and currently directs an overseas study program to Prague and Berlin, where students create collage journals inspired by artists such as Hannah Höch, Toyen (Marie Čermínová), and Jiří Kolář. She is the author of the story collection For Sale By Owner (Kore Press) and of Liliane’s Balcony (Rose Metal Press), a novella-in-flash set at Frank Lloyd Wright’s Fallingwater and winner of silver medal awards from the IPPY, Foreword, and Eric Hoffer Book Awards. A recipient of grants from the Indiana Arts Commission and the Sustainable Arts Foundation, she teaches creative writing and literary collage at Indiana University South Bend. Her blog features interviews with contemporary writers and the series, “Letters to Dead Authors”. Visit her author website here.