View cart “The Fact of Memory” has been added to your cart. 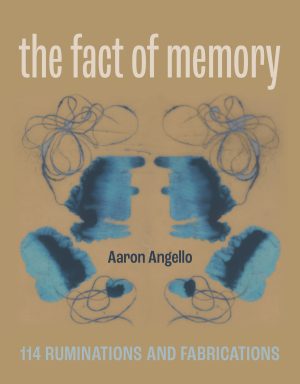 Campaign for the American Reader

A child keeps a pet cloud in a dresser drawer. A man has coffee with his doppelganger. A 20-something stunt double performs pirate swordplay at birthday parties. A schoolkid ponders the absurdity of Hell. A woman sings a Diana Ross song to a stranger across a subway platform. In this genre-defying collection of short prose pieces, Aaron Angello explores the subtleties of recollection, imagination, and the connections, both momentary and long-lasting, between oneself and others. Each piece riffs on a word from Shakespeare’s Sonnet 29; over the course of 114 days, Angello woke early, meditated upon a single word from the sonnet, and wrote. The results are sometimes funny, sometimes profound, and sometimes heartbreaking, accumulating into a map of a mind at work, a Gen X coming-of-age of sorts, seamlessly invoking the likes of The Golden Girls, Spinoza, Rick Springfield, and Rimbaud. The Fact of Memory uses its innovative structure to pause and consider how language—and people—can both enthrall and abandon us, how the invincibility of youthful ambition gives way to the nuanced disappointments of aging, how unanswerable philosophical questions can share the page with glimpses of our former selves navigating a fragmented past.

«Under Aaron Angello’s dexterous hand, words break open to reveal the swirling stories, dreams, and kaleidoscopic associations that they carry and usually conceal. But these aren’t just any words—they’re the English words most readily labeled indelible, permanent, and solid: Shakespeare’s words. In The Fact of Memory, Angello, with his seemingly infinite imagination, endless flair, and deep compassion, exposes the communitarian and fluid nature of even these most exalted words. Radically open, impeccably written, Angello’s paragraphs enter ‘the theater of memory’ to describe what might just be your memory, or ‘very like,’ which is to say, uncanny, at once so beautiful and so strange.»

«My first encounter with Shakespeare, my very first obsession with literature, was Sonnet 29. The last couplet was printed on a hot pink bookmark, and gosh, I felt so deep—a six-year-old reciting Shakespeare!—and I might not have understood what the whole of it meant, but I knew each word, individually, as its own perfection. What I love about Aaron Angello’s The Fact of Memory is that it is an intentional rejection of traditional literary analysis. Sonnet 29 becomes his practice of dailiness, one word at a time, and every word opens new insight, new possibility, new form, new newness, always surprising, a nostalgia with neither pretention nor sentimentality: a brave deconstruction and a tender reconstruction, scorned.»

Lily Hoang, author of A Bestiary

«Malebranche’s maxim, ‘Attentiveness is the prayer of the soul,’ permeates Aaron Angello’s The Fact of Memory, a deeply sensuous meditation on Shakespeare’s 29th sonnet. Peeling back each word individually, Angello rhizomatically maps the memories rooting each term to the cartography of our inner lives. An erotics of daily life, The Fact of Memory shows ‘how our bodies continue to extend outward,’ the flesh veined through with ‘the books and furniture and walls, out along streets and through buildings,’ exposing the deep memories, those transcendent moments neglected as the mundane. Interrogating the distractions of neoliberal capitalism, Angello beckons us to honor beyond the human, ‘to see across the countryside,’ at last, ‘into eternity.’»

J. Michael Martinez, author of Museum of the Americas

«Mysteriously, from the language of a single Shakespeare sonnet emerges a whole book, a kind of fractal memoir or self-mythology (or perhaps all memoir is mythology), a book about ‘the past (memory) and the present (existence),’ a book about ‘everything really,’ the things we keep to tell ourselves the stories of our lives. ‘It builds from within itself.’ Aaron Angello’s The Fact of Memory reminds me the world is full of other-dimensional meaning, infinite meaning, waiting to bloom.»

Elisa Gabbert, author of The Unreality of Memory

Aaron Angello is a poet, playwright, and essayist from the Rocky Mountains who lives and feels remarkably out of place in the charming, but very Eastern, town of Frederick, Maryland. He received his MFA and PhD from the University of Colorado Boulder, and he currently teaches writing and theater at Hood College. Visit his website at here.