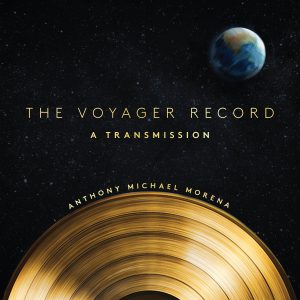 Finalist for the CLMP Firecracker Award in Nonfiction.

Late summer 1977: two identical robotic spacecraft launch from Cape Canaveral. Their divergent paths through the solar system take them past gas giants, icy moons, asteroid belts, and eventually into the unknown of interstellar space. There, they will continue to travel on forever, the fastest moving objects ever created by humans. The Voyagers carry a message from Earth, a phonograph record plated with gold containing 27 songs, 118 images, and greetings in 55 languages meant to summarize all life on our planet for the extraterrestrials who might one day encounter the crafts. The Voyager Record: A Transmission is the record of that record: a history in fragments exploring how legendary astronomer Carl Sagan and his team attempted to press the entire human race into a single groove. Combining elements of poetry, flash fiction, and essay, Anthony Michael Morena creates a collage of music, observation, humor, and alienation. Giving the 38-year-old original playlist a B-side update, Morena’s The Voyager Record calls out to its namesake across the billions of miles of emptiness: Send more answers.

«Anthony Michael Morena’s The Voyager Record is its own charming exploratory device. Combining backstage stories about the creation of the Voyager spacecraft’s “Golden Record” (a touching dream of cramming a musical and visual portrait of our planet onto a single disk) and various imagined encounters with bemused or frightened alien cultures out there, Morena reveals how best intentions can be compromised, and how communication is subject to an infinitude of possible miscues. This is a quietly profound and entertaining book.»

Philip Graham, author of The Moon, Come to Earth: Dispatches from Lisbon

«In the 1970s, Voyager left Earth carrying a Golden Record meant to represent human life to alien “recipients.” At the same time, a generation of children was also launched, into their own lives, each carrying a record of human evolution—its possibilities, leaps of faith, errors, and compromises—in the form of DNA. Anthony Michael Morena’s graceful ekphrastic essay The Voyager Record brims with the humility and hopefulness of these twin gestures, and points at the way in which every inmate of our planet is also a galactic Voyager.»

«Humans are odd, unpredictable, warlike—and often unintentionally funny. Through the creation of his own Voyager Record—tracks laid down and sent into space in the 1970s to introduce humanity to potential aliens—Anthony Michael Morena both commemorates and satirizes the original in this highly imaginative, poignant, and entertaining book, melding personal and scientific, artistic and philosophical. I’d send this out into the cosmos, no problem.»

Tania Hershman, author of My Mother Was an Upright Piano: Fictions 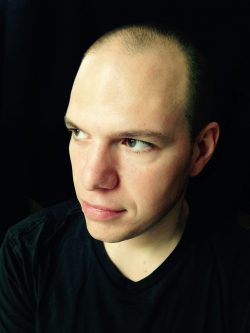 Anthony Michael Morena is a writer from New York who lives in Tel Aviv. In 2015 he received his MA in creative writing from the Shaindy Rudoff Graduate Program in Creative Writing at Bar-Ilan University. His poetry and prose have appeared in The Normal School, Ninth Letter, Flapperhouse, and Queen Mob’s Tea House. He has also been a guest editor for The Ilanot Review and a regular reader for Gigantic Sequins, a good-looking, biannual, black and white literary arts journal. The Voyager Record is his first book. Visit his website here.