We can hardly wait to share our June 2019 book with you: The After-Normal: Brief, Alphabetical Essays on a Changing Planet by David Carlin and Nicole Walker.

Below is a sneak peek at the front cover and more information about the book! We’ll have some pre-release copies for sale at AWP Portland and then general preordering for the book will begin in April. 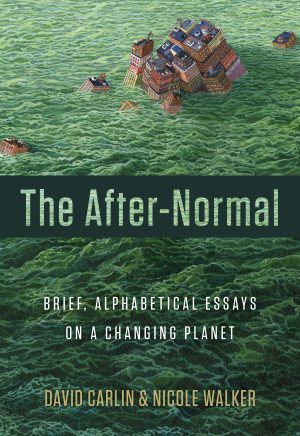 The After-Normal
Brief, Alphabetical Essays on a Changing Planet
By David Carlin and Nicole Walker
June 2019
ISBN 978-1-941628-17-1
View the press release for the book here:  TheAfter-Normalpressrelease

“A” is for Australia and “A” is for Arizona, over 9,000 miles apart but sharing the same Earth. In this eccentric, intimate compendium of short environmental and personal essays, David Carlin (in Melbourne) and Nicole Walker (in Flagstaff) engage in a long-distance dialogue between two writers, creating an improvisational subversion of the encyclopedia, a witty-yet-serious send-up of the concept of a survival guide. In this era of interconnected ecological, political, and human rights catastrophes, these two whimsical, elegiac, and intellectually questing voices contemplate the role of the individual in the midst of increasingly inescapable collective action crises that call the very concept of survival into question. Refusing equally to find solace in false hopes and to give in to murky despair, Carlin and Walker deftly use the flash nonfiction form to wonder and worry their way through the alphabet in search of a path forward. With meditations on topics ranging from bitumen to plasmodia, elephants to xeric, The After-Normal: Brief, Alphabetical Essays on a Changing Planet collects an A to Z of people, places, and phenomena to marvel at, to kick against, to let go, and to fight for.